For 20 years, near Lake Tanganyika in Burundi, locals have been terrorized by one of the largest freshwater crocodiles in the world.The victims were killed by the crocodile when they were fetching water from rivers. A large number of crocodile eggs were also collected along river banks, meaning that the threat is multiple. 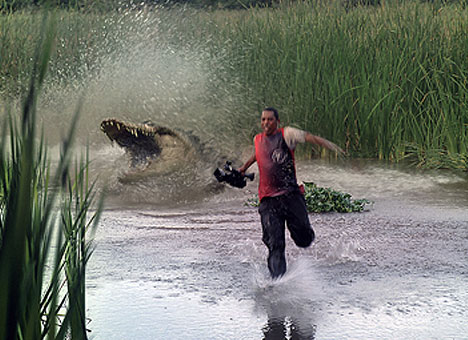 The 25 foot long crocodile, named Gustave, has an insatiable appetite for people. He is known for having eaten over 200 people, though some believe that number to be as high as 300.

In the past, all attempts to catch or kill Gustave were unsuccessful. Still, for one man who has made it his mission to hunt the crocodile, there may be a more humane solution to stopping this man-eater.

Infamous cases, when crocodile hunters were even more determined to stop these killings, but ended up with some of their body parts missing – can by no means be left unnoticed.

Patrice Faye is Frenchman, but he’s been living in Burundi for the past two decades. He became something of a local hero 11 years ago when he made his first attempts to capture Gustave using a trap, but that didn’t work out well.

“He must have a very strong survival instinct , because he has survived while other crocodiles were massacred,” Faye told the BBC Brasil. Despite the fact that Gustave has eaten so many people, Faye still has respect for his elusive nemesis–and does not intend on killing him.

It may take more than a bullet to stop an enormous, man-eating crocodile–or to discourage his devoted follower, Patrice Faye.