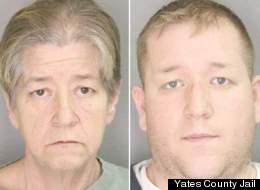 A mother’s love knows no bounds, but Kimberly Margeson’s love for her son may have shown no boundaries.

Margeson pleaded not guilty Tuesday in Middlesex Town Court and was remanded to the Yates County Jail and released in lieu of $2,000 cash bail, deputies said, according to the Elmira Star Gazette.

Partridge, who has been in the jail since Jan. 26 on an unrelated felony weapon possession charge, is scheduled to be arraigned on the misdemeanor in Penn Yan Village Court on Feb. 11, according to PressConnects.com.