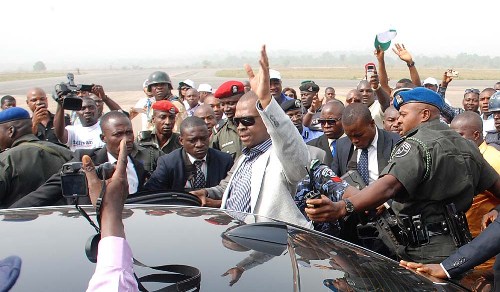 Governor Sullivan Chime of Enugu State returned on Friday to wild jubilation at Akanu Ibiam International Airport, Enugu, after spending about 140 days outside the country.

Chime, who had arrived Abuja on Wednesday from London, touched down at the airport around 3.01 pm amid cheers from the crowd who had thronged the airport since morning to receive him.

On arrival, Chime was received by the Acting Governor, Mr. Sunday Onyebuchi, accompanied by his wife, Nneka; national and state assembly members and other top government officials.

Chime, decked in a cream coloured jacket, blue stripped shirt and a pair of black trousers, acknowledged cheers from the ecstatic crowd before being driven to the Governor’s Lodge.

Another crowd of people dancing and singing were on hand at the lodge also to welcome the governor. The governor and his wife, Clara, later took time to receive many guests.

As news of Chime’s arrival into the country filtered to his home state, the residents took to the streets in jubilation chanting victory songs. Chime’s long absence from the state led to apprehension as there were speculations in the media that he was terminally ill even as the state government shrouded his whereabouts in secrecy.  His return finally marked the end to an era of uncertainty and palpable fear as the excited residents now have their governor back.