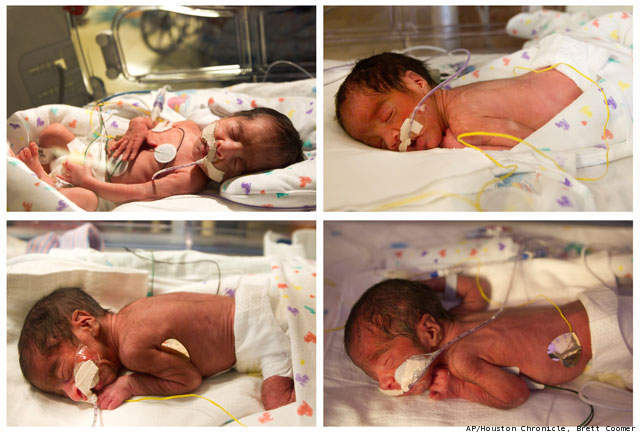 A Texas couple trying to give their son a little sister gave him four brothers instead, beating the odds to deliver quadruplets – two sets of identical twin boys conceived at the same time.

Tressa Montalvo, 36, gave birth to quadruplets Ace, Blaine, Cash and Dylan on Valentine’s day, according to a statement from The Woman’s Hospital of Texas in Houston. Ace and Blaine shared one placenta, while Cash and Dylan shared another.

“We tried to stick to the A-B-C-D theme when naming them,” Montalvo said in the statement. “We didn’t expect it, we were trying for just one and we were blessed with four.”

Montalvo and her husband, Manuel Montalvo Jr., 43, thought they were having twins until their doctor detected a third fetal heartbeat. They were then referred to a maternal fetal medicine specialist, Dr. Brian Kirshon, who found a fourth heartbeat.

“We couldn’t have been more surprised when Dr. Kirshon told us we were having four babies and that they were two sets of twins,” Manuel Montalvo said in the statement. “We were trying for one little brother or sister for our two-and-a-half year old son, Memphis.”

Roughly 2 percent of all pregnancies result in one set of identical twins, when a fertilized egg splits into two embryos. The odds of having two sets at the same time? Pretty slim, according to Dr. James Grifo, director of the NYU Fertility Center.

“The chance of this outcome is approximately one in 10,000,” Grifo said of two embryos splitting after IVF. “This could also occur in a natural conception, but the chance of that is much
[rarer].”

The Montalvos’ pregnancy was all natural, according to Tressa Montalvo.

“No fertility drugs were used. We planned the pregnancy – I guess we just succeeded a little too much!”

Because identical twins can share an amniotic sac and a placenta, they’re at risk for becoming tangled in each others’ umbilical cords and twin-to-twin transfusion syndrome – a rare placental disease that results in one twin getting less blood than the other.

“Having multiples certainly adds risk to a pregnancy in and of itself,” said Dr. Kimberly Gesci, an obstetrician at UH Case Medical Center in Cleveland, Ohio. “One of the biggest risks is preterm delivery and growth restriction.”

But while the Montalvo house just got a lot more crowded, the mom and dad of five say they’re not done yet.