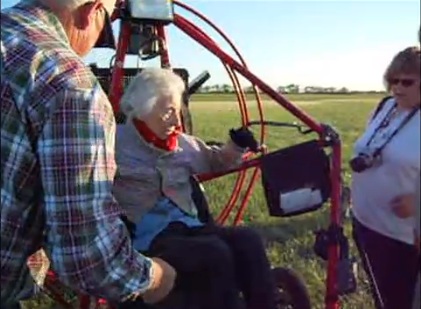 This story is a tearjerker, so grab your tissues now. A 92-year-old woman from Iola, Kansas, had a wish fulfilled by her family just six weeks before she died. Dorothy Ellis had seen a man flying over her house in a motorized parachute and decided that she wanted to do the same thing. So her family made her wish come true.

Dorothy’s granddaughter Holly and the hospice nurse who cared for Dorothy made arrangements for a pilot to fly over the family’s ranch house in southeastern Kansas.

So on Sept. 18, 2012, on a crystal-clear day with blue skies above and green grass below, Dorothy was taken for the ride she had wished for in a rainbow-colored parachute, and her son Tom captured it all on video.

In all four minutes of “Grandma Dorothy Flies Over the Rainbow,” viewers get to witness Dorothy living out her dream. Holly said, “It shocked the hell out of us,” when they found out that this was what Grandma had in mind to do before she died.

Holly added that her grandmother had said, “I figured I’m going one way or another by now,” so they wanted to make something special happen for her. At the end of the video, the message “Thank you for letting our Dorothy fly” appears on the screen.

What makes the video all the more touching is that it’s set to a version of the song “Over the Rainbow” by Israel “IZ” Kamakawiwo’ole.

Viewers have been genuinely touched by Grandma Dorothy getting her wish, with one person writing, “This made my day. Dorothy is truly over the rainbow now.” Another wrote, “I hope she had an awesome life, because her smile lightened mine.”

We’re just glad that Dorothy, from Kansas, finally got her rainbow.