Home Metro News Port Harcourt Is Now One Of The Developed Cities Of The World...
Facebook
Twitter
WhatsApp 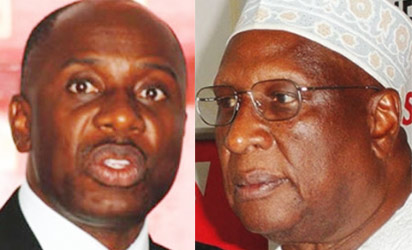 In what might be seen as a major step towards restoring peace and putting an end to the protracted battle between governors elected on the platform of the Peoples’ Democratic Party (PDP) and its national Chairman, Alhaji Bamanga Tukur, the latter has described the Rivers State governor and chairman of Nigerian Governors Forum(NGF), Rt. Hon. Chibuike Rotimi Amaechi, as the best governor, considering his excellent track record of performance and achievements in the state as well as the numerous people-oriented projects embarked upon by his administration.

Tukur spoke on Saturday in an interview with journalists after inspecting projects including the new world-class Kesley Harrison Hospital and the ultra- modern state-of-the-art Maxillo-Facial Dental Hospital built by the Amaechi-led administration in Port Harcourt.

Earlier on Friday,Tukur had seen the Port Harcourt-Owerri road, a 42-kilometre federal road done by the Amaechi administration, the new model primary and secondary schools, one of the over 120 new health centres, Songhai Farm in Tai, Afam power project, Obiri-Ikwerre Interchange on the East –West road, and the over 38,000-seater new stadium, being constructed in the Greater Port Harcourt city.

Apparently satisfied with what he had seen, Tukur said with the level of social and economic transformation in the state, Port Harcourt is now in the list of developed cities of the world.

Tukur also explained that basic developmental projects in the area of road, infrastructure and transportation, education, health and economic transformation “has become a glaring programme people can see in the heart of the nation, as efforts have been directed and focused on fantastic development and achievements by the Amaechi administration.

“What I mean by a developed state in the comity of nations is when you can see education being transformed, health, infrastructure are given priority and whatever things (infrastructures) developed countries can be proud of, we also have them in Rivers State”, Tukur said.