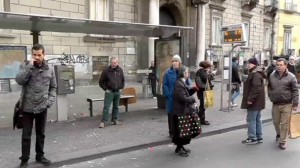 Naples residents were left stranded at bus stops across Italy’s third biggest city on Wednesday as the public transport operator, hit by government spending cuts, ran out of fuel.

“Due to a lack of fuel our services are not guaranteed,” transport operator ANM announced on its website and at bus stops around the city, enraging commuters.

“Can someone tell me if the C27 is going to show up? I have to get into the center,” Luana Pisano wrote on ANM’s Facebook page. Several residents demanded a refund for their season tickets.

ANM said it hoped its services would be back to normal later on Wednesday. Italian newspapers reported that fuel companies had cut supplies to the transport operator because it owed them too much money.

ANM said it was a victim of cuts to local authority funding in a government austerity program aimed at shoring up Italy’s public finances, which has also included an increase in fuel taxes. [Reuters]