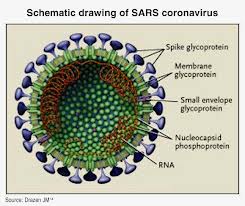 A third patient in Britain has contracted a new SARS-like virus, becoming the second confirmed UK case in a week and showing the deadly infection is being spread from person to person, health officials said on Wednesday.

The latest case, who is a member of the family of another patient, brings the worldwide number of confirmed infections with the new virus, known as the novel coronavirus or NCoV, to 11.

Of that total, five have died. Most of those infected had recently travelled in the Middle East and three have been diagnosed in Britain.

NCoV was identified when the World Health Organisation (WHO) issued an international alert in September 2012 saying a virus previously unknown in humans had infected a Qatari man who had recently been in Saudi Arabia.

The virus belongs to the same family as SARS, or Severe Acute Respiratory Syndrome – a coronavirus that emerged in China in 2002 and killed about a tenth of the 8,000 people it infected worldwide. Symptoms common to both viruses include severe respiratory illness, fever, coughing and breathing difficulties.

The UK Health Protection Agency (HPA) said on Wednesday the latest patient, who is a UK resident and does not have any recent travel history, is receiving intensive care treatment at a hospital in Birmingham, central England.