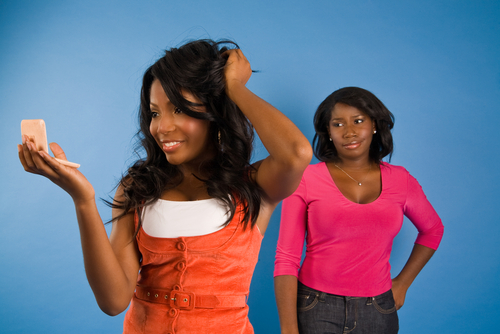 Don’t you hate that? You give a guy, the best years of your life or you’ve liked that guy for ages but yet he keeps choosing these tramps over you?

N.B not that I’m bitter about my ex’s new girlfriend or anything…..kmt

So what’s going on? What’s so good about her? What was it that he couldn’t or didn’t see in you? He most likely isn’t going to tell you why but I have seven reasons why he chose her and not you.

1. GOD’S TIME IS THE RIGHT TIME– Timing is everything. It’s not your time to be with him or it will never be your time. Sometimes some things aren’t meant to be.

2. Attraction – Hard pill to swallow but it could be that she’s more attractive than you, in which case you can’t blame him. We all want someone on our arm that we can be proud of but one man’s trash can be another man’s treasure right?

3. Confidence – If you like to constantly point out your flaws just so he could dispute them, chances are he was thinking ‘On to the next one!’ Guys like confident girls who are confident in their own skin. If you were guilty of this, you just gave him the green light to pick a more confident chick, sucks huh?

4. She trusts him– If you were the sort of girl who checked their man’s phone while he went to the toilet or did some military style interrogation when he went out with his boys? That sort of behavior screams crazy/needy/out of control/ neurotic freak. If you trusted him, you might have kept him.

5. She knows he’s not psychic – What do I mean? Basically when a guy asks you ‘what’s wrong?‘ TELL HIM. They are not psychic, they won’t just ‘know’. This kind of behaviour drives guys up the wall, and they hate it. As I always say communication is KEY. I realize I’m guilty of this one *sighs*

6. She understands that his bank account isn’t bottomless – If you were one of those girls always demanding money for this or that, it’s no wonder you found yourself suddenly single. This other chick is probably within his price range.

7. She respects him –If you complained at everything he did instead of giving constructive criticism. No guy likes to stick around for abuse. Odds are this new chick probably shows she appreciates him not just when he does something for her but constantly, guys need love too, you know!

To sum it all up, you and her are two different women and he choosing her has no reflection on you as a woman. He’s made his choice and the best revenge you can do is meet someone who knows your worth and stop thinking about your ex cos trust me he ain’t thinking about you.