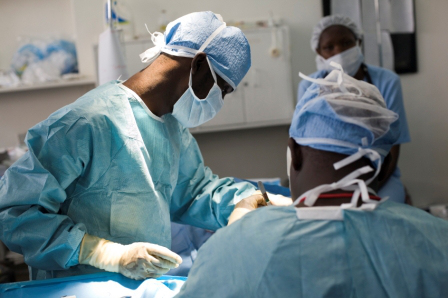 While folks are having strange addictions to black market silicone butt injections in America, folks in South Africa are doing the complete opposite…

When it comes to plastic surgery it appears that for young black South Africans, less is more. Nip-and-tuck procedures, breast reductions and even lip reductions are on the increase among young, affluent black South Africans. Dr Leon Dumas said the procedures being done on young black people were contrary to the perceptions about what patients wanted. “Normally there is a perception that everyone wants breast implants, but what we are seeing with our young, black patients is that reduction is the major trend. It’s no longer seen as acceptable to have big breasts or a big body.”

Dumas said a lot of black people now had access to a disposable income and no longer saw cosmetic surgery as taboo. “As young black people become more affluent, they are more open-minded about plastic surgery. And what we are noticing is that the surgeries are mostly cosmetic and voluntary. So people do them not because their health depends on them, but because they often see them as a lifestyle enhancement.” According to independent research carried out by the Association of Plastic and Reconstructive Surgeons of Southern Africa, the local market is in line with global trends because over the past 10 years it has seen an increase of 780 percent in non-invasive procedures such as botox injections and a 128 percent increase in breast procedures.
Association spokesman Dr Chris Snijman said a growing number of people had been able to have cosmetic surgery because of cheap pricing. “Cosmetic surgery in South Africa is among the most affordable in the world,” he said. According to First Health Insurance (FHI, a company that finances plastic surgery), it received applications to the value of R100 million last year alone.
Jason Sive, the director of surgical finance at FHI, said that now, more than ever, South Africans who could not finance their procedures were willing to put up valuable items as collateral for surgery-related loans. “A lot of the people we deal with are people who are not able to afford the cost of procedures, or have only a fraction of the money to cover the cost. “Now they are willing to invest more in getting it done and are putting up the necessary collateral and going through credit checks to get these loans.
“It’s important when people take out loans for cosmetic surgery that they take it for a long-term surgery, not for something they may want to change even before they have repaid the costs. We have had lots of people who do that and it’s not worth it.” Due to the affordability of plastic surgery in South Africa, an increasing number of international tourists have been coming to South Africa for cosmetic procedures. Hundreds of these so-called medical tourists flock to South Africa every year and often do so without fully disclosing the medical reasons for their visits.