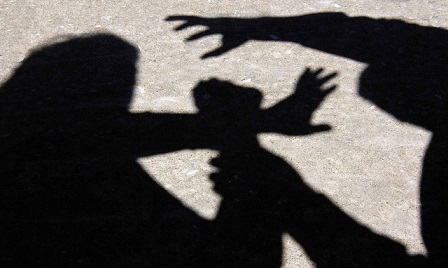 A former evangelical church minister who subjected his family to long term cruelty and séx abuse was jailed for 15 years today by a judge who called him ‘bullying and tyrannical.’

The 40-year-old had been convicted earlier this month of raping his wife and stepdaughter and being cruel to both his stepchildren between 1995 and 2010.

At one stage, early on in the man’s relationship with the mother and two children, social services were involved with the family – but did not detect what was going on.

Jailing the man at Gloucester Crown Court today Judge Jamie Tabor QC said that by the time the man married his wife he had already developed into ‘a controlling husband and stepfather.’

Judge Tabor said the man had behaved in a tyrannical manner to the wife and her son and daughter, who were very young when the relationship started in 1995.

‘You overcame your wife to the extent that she just sat there while you bullied your stepchildren mentally and physically,’ said the judge.

‘The so called discipline you imposed on them was no more than an excuse for you to lose your temper and beat them.’

The judge said the offences had gone on for a ‘long period of time’ – about 15 years – and it was regrettable that when social services were involved with the family at a relatively early stage the man’s behaviour was not uncovered.

‘By the time your stepdaughter was 16 you were raping her on a regular basis and subjecting her to threats of violence if she disclosed what was going on.

‘You were still enjoying a séxual relationship with your wife but during the latter stages of the relationship she became increasingly reluctant – and you became more and more demanding and forceful. On at least two occasions you simply raped her when she refused to have séx with you.

‘You have left in your wake some deeply troubled people.  You betrayed the trust instilled in marriage by raping your wife. The two children may never get over what took place during your time in their family. ‘

The man had denied 13 charges of séxual and psychological abuse of his family but was found guilty of all but one charge. The charges covered a 15-year period from March 1995 until January 2010 when the children were growing up.

During the trial at Gloucester Crown Court the prosecution said the man, a regular churchgoer who has previously been a minister, had a ‘particular understanding of the Scriptures’ which made him believe what he was doing was justifiable.

Ian Fenny, prosecuting, said ‘This defendant used his particular understanding of the scriptures as a way of determining how his wife should behave towards him.

‘He had clear ideas of obedience – that his wife should be obedient to her husband and the children to their father.

‘He was of the view that by the time the lady became his wife there was effectively a Biblical precedent to say a wife would always have to submit herself to her husband and if she did not she committed a sin.

‘There were many occasions when she did not want to engage in séxual intercourse with him but did so – where he overstepped the mark and pressed himself upon her séxually when she manifestly did not want it.’

Mr Fenny alleged that as well as inflicting physical punishment on the children and raping the girl he would also make them perform menial tasks – such as getting down on hands and knees to clean up specks of dirt left behind on the carpet after it had been vacuumed.

The man also used to wake up his stepdaughter in the early hours of the morning by throwing water on her face.

‘Their lives were a total Victorian nightmare,” said Mr Fenny. ‘This man established himself as a controlling Martinet – it is an old fashioned word but it describes how he behaved. He wanted everything done his particular way – how the house was kept, how people looked (in particular his partner), how she dressed, what everyone in the family could and couldn’t do.’

Mr Fenny said his behaviour towards his family was seen by another family who attended the same church and they had been appalled.

They also observed he did not behave in the same way to his own children, whom he had by his wife later in the marriage. It was only the stepchildren he treated cruelly.

In 2004 there was a ‘rumble’ that something was going on in the family and the school and social services became involved, said Mr Fenny. But it went no further.

However, in 2008 the girl made a complaint and was joined by her mother and an investigation was triggered.

The man in evidence acknowledged that he had puritanical religious and Biblical beliefs but denied all the allegations made by his family.

Today his barrister, David Martin, conceded there was little to be said on his behalf following the conviction. He said the man still maintains a ‘blanket denial’ of all wrongdoing.

The jury had heard only about the bad things that happened in the family but there had been many good times too, he submitted.