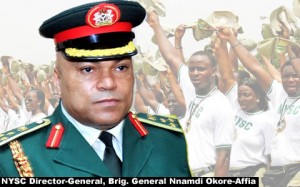 Ekiti State chapter of the National Association of Nigerian Students (NANS) has threatened mass action following an allegation that only 508 out of eligible 4,335 graduates of two higher institutions in the state were mobilised for the compulsory national service.

In a statement made available to newsmen in Ado Ekiti on Monday and signed by the chairman, Ekiti Axis, Damilare Bewaji, NANS faulted what it said was the national mobilisation quota of the National Youth Service Corps (NYSC) for Batch A of the 2013/14 service year.

The student body said the Federal Polytechnic, Ado Ekiti and Ekiti State University (EKSU) were allegedly shortchanged in the mobilisation by the NYSC, saying only 202 graduates of the Federal Polytechnic, Ado Ekiti were mobilised out of the 835 that were compiled by the institution for mobilisation. However, the statement says that the worst scenario was recorded in EKSU, where it said “only 306 were mobilised for the same youth service out of about 3,500 eligible students that were supposed to be mobilised.”

A seven-day ultimatum was therefore issued by the students to NYSC Director-General, Brigadier-General, Nnamdi Okorie-Affia, to ensure that all prospective corps members in the state were fully mobilised, saying they would mobilise the students for a protest at the NYSC office in Ado Ekiti. They described the action of the NYSC as “highest level of criminal injustice capable of ruining our members’ future unless steps are taken to ensure that the right thing is done in this matter.”