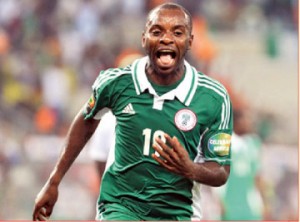 The ownership saga of AFCON hero Sunday Mba continues as Chairman of Warri Wolves, Godwin Abigor yesterday expressed his displeasure over the claim by Enugu Rangers that the player belongs to the club, adding that the player’s attitude was shameful.

Abigor laid credence to his claims by producing documents to authenticate the fact that Mba was still a Warri Wolves player.

Among the documents produced was a November 2, 2012 letter from Rangers requesting for the services of Sunday Mba, Chigozie Agbim and Lazarus Chukwu. Wolves were yet to release him as negotiation for any transfer, according to Abigor, had not taken place.

“In that letter, Rangers referred to Mba and the other two as Warri Wolves players and since transfer had not taken place why are Rangers now claiming that Mba was theirs?” Abigor asked.

Abigor also produced the player’s license and contract showing that he was a Warri Wolves player. Their petition to the League Management Board against the move of Rangers to sell Mba off to Europe even during the Nations Cup and the resolution of the league board on the matter were equally produced.

“I pray for the career of Sunday Mba to blossom. He is a good player but he must watch his conduct and behaviour. It is difficult to succeed without discipline. Mba has exceptional talent but he must be honest and sincere in all he does. He must learn to respect contracts otherwise he may not be a successful professional. On the side of Rangers Football Club, I find their claim as irresponsible. The documents speak for us.”

Rangers have also said the club would produce their own documents on the player.

Sources close to the player reveal Mba has left for Europe. Although the part of Europe he went to for trials was not disclosed, but a source hinted Mba went to Turkey as some Turkish clubs have shown interest in the player.