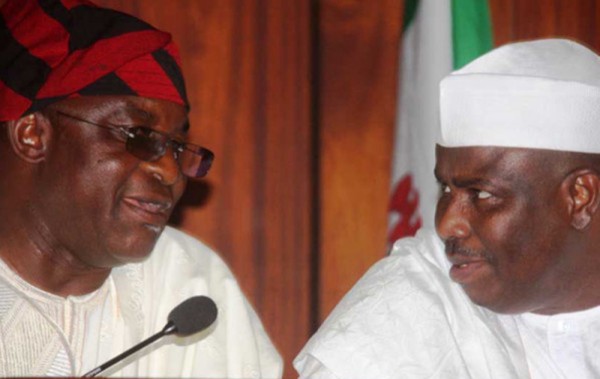 Senate President David Mark, who watched the final match live between the Super Eagles of Nigeria and Burkina Faso in South Africa, has urged Nigerians to savour the victory and use it as a rallying point to further the peace and unity of the country currently challenged by unabating insecurity.
Senator Mark, who led a Federal Government delegation to watch the final of the 2013 African Cup of Nations in South Africa, was pleased that “the victory of the super Eagles has offered the needed elixir and tonic to boost the peace and unity of Nigeria.”
In his own reaction, Speaker of the House of Representatives Aminu Waziri Tambuwal, who congratulated Nigerians over the victory of the Super Eagles, said the House of Representatives will host the victorious Super Eagles during a plenary.
In a statement issued in Abuja by his Special Adviser on Media and Public Affairs, Malam Imam Imam, Tambuwal not only described the victory as sweet, but reassuring and a reaffirmation of the superiority of Nigeria over the rest of Africa both in football and other areas of human endeavor.
He said the Eagles have not only won back the hearts of supporters the world over with their mesmerizing display, they have also lifted the spirit of the nation.
The Speaker said the unity of purpose shown by the team and their handlers reaffirmed the notion that when all hands are on deck, achieving common objective will be a lot easier.
AdvertisementABUJA DOCTOR REVEAL THE UNIQUE WAY TO PERMANENTLY CURE WEAK ERECTION, SMALL AND SHAMEFUL MANHOOD AND INFERTILITY ISSUES WITHOUT SIDE-EFFECTS WITHIN SHORT PERIOD!! DON'T BE A VICTIM!! Click Here for More Details