Ten hunters have been arrested by the Ondo State police command over the mysterious death of one of their colleagues, Abiodun Olanipekun during a hunting expedition in Arigidi Akoko, Akoko North West area of the state.

The deceased also a hunter was said to have gone on hunting expedition with his friends in the thick Agbaluku forest in Arigidi only to be brought back dead.

According to the OndoState police PRO, Wole Ogodo, the preliminary investigation showed that Olanipekun committed suicide. He however noted that investigation into the case continuing.

The family of the deceased revealed that reports brought by the suspects was that Abiodun Olanipekun, while fiddling with his dane gun mistakenly shot himself dead.

Another source said he aimed the gun at an animal but the bullets refused to be released following which he decided to adjust it only for the cork to snap killing him instantly. 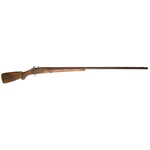 The police, is however, trying to unravel another report that maybe one of the hunters mistakenly shot the deceased thinking he was an animal during the expedition.

However, Vanguard learnt that the bullets pierced through his mouth and the head and ripped it open.

He was said to have died on the spot and his corpse deposited at the mortuary of the Specialist hospital in Ikare. His 10 friends are said to be in detention at the Oke-Agbe Divisional Police station for questioning but the police PRO, Ogodo claimed ignorance of the arrest of the suspects.

Ogodo, however, said that a paramount traditional ruler in the town reported the matter to the divisional Police station in Arigidi.

An Uncle of the deceased, Mr Dele Ajayi who confirmed the death of Abiodun said that several versions of what happened in the forest during the tragic hunting expedition were given by the suspects.

Ajayi, however, said that the family members of Abiodun have taken the ugly incident as an act of God.

Meanwhile, it was gathered that the traditional ruler has promised the police authorities in the state to help in fishing out other suspects now on the run.

Police PRO said that the investigation into the death of the hunter continues. [Vanguard]