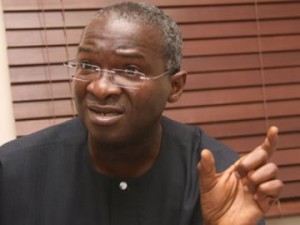 Governor Babatunde Raji Fashola of Lagos State has declared that certain ministries in the state will, starting from the first week of March, commence weekend businesses due to growing demand for services and the need to make the government deliver on its mandate.

Governor Fashola stated this while giving account of his stewardship at the premises of the Lagos State Television Station (LTV 8), at an event to mark his 2,100 days in office. Speaking on the occasion, which was attended by a host of former leaders of the state, Fashola said the pilot scheme was an innovation embarked upon by his administration to meet Lagosians’ growing need for government services.

According to the governor, the ministries which would be used for the pilot scheme included those of transportation, urban and physical planning and land bureau service. The governor then added that the affected ministries would commence operation from first Saturday of March, except on weekend sanitation days.

He said their offices would be opened for businesses as between 10.00a.m. and 2.00 p.m, disclosing that the state head of service had since been charged with the responsibilities of working out modalities for the successful take off the pilot scheme.

Also, magistrates’ courts in the state have been directed to sit on Saturdays for purposes of allowing easier access to justice, among others. He disclosed that magistrates’ courts would commence weekend sitting as from March 2, pointing out that everything about the new innovation was about demonstrating the commitment of the state government and the party it represented to improving service delivery, as well as adding value to the lives of the people.