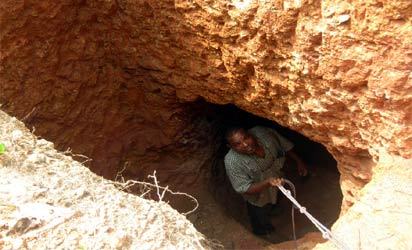 Information emerging from the Ogun State Police Command has it that the command has arrested three suspected ritualists while another ritualists’ underground den has been uncovered in Idode-Imomo, Ijebu North-East Local Government Area of Ogun State.

The state Police Public Relations Officer, Muyiwa Adejobi, who stated this, said the command had begun an investigation into the matter. According to him, the suspects, Kehinde Rufai,Debo Awonaya and one David, are cooling their feet in police custody.

The Vanguard, which reported the news, said that the place was located between Ijebu-Ode and Atan, close to the border area of Oyo, Ogun and Ondo states.

Eye witness account says that some youths discovered the ritualists underground den located in a forest after a 70-year-old man identified as Kehinde Rabiu was declared missing. According to the source, residents of the area were shocked when they saw the underground den which has stairs underneath. The suspected ritualists were reported to have built a house beside the underground in the forest and planted indian hemp around the place.