The Lagos police said the explosion is not the “type of explosion that Nigerians are used to.” An explosion under the Festac Link Bridge, on Monday, killed one person and left another seriously injured. 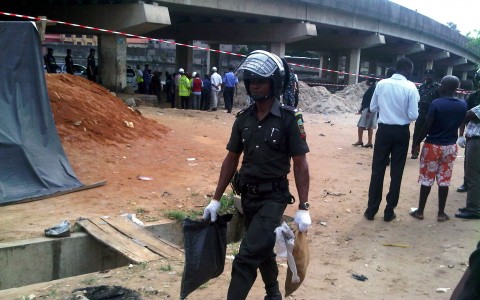 The impact of the blast left the body parts of Pius Oladele, head of the sand dredgers association in the area, flying in different directions. Emergency rescue officials, who arrived minutes after the noon incident, used shovel to scoop pieces of bloodied body parts scattered on the ground into a bag.

A police officer, who visited the deceased just before the explosion, identified simply as Inspector Sani, sustained severe injuries and had been rushed to the hospital, witnesses said. “After the explosion the police man’s leg was broken and even one of his eyes was affected, but he himself (Mr. Oladele) his two legs were off,” said Peter Adeola, an eye witness.

“Not what you think”

The about 40 inches high concrete pavement on which the deceased was seated was shattered, some of the blocks flying into the lagoon. But Umar Manko, the Lagos State Commissioner of Police, who was at the explosion site a few hours later, tried to play down the incident. “The experts in that are already there. The impression there is not what all of you might be thinking, it is so minor, it is not the type that everybody is thinking about,” Mr. Manko said.

“It is not the type of explosion that Nigerians are used to of recent. Just somebody trying to play games here and there by using common battery put in a torchlight, that’s what we found there,” he added. The deceased’s white Nissan Pathfinder, with Lagos plate number, LSR 957 AZ, was parked a few metres from the explosion site. In addition to the sand dredging business thriving under the Festac Link Bridge, which links Festac Town to Amuwo Odofin Housing Estate, a small human settlement had sprung up at the bank of the lagoon.

Ayodele Adewale, the Chairman of Amuwo Odofin Local Government Area, said that it’s time for the residents to relocate. “As from today, make una begin look for alternative place to stay,” said Mr. Adewale, who visited the scene a few hours after the incident. About four hours after the incident, Dan Okoro, the Area E Police Commander, told the residents to return to their businesses. “The place is safe now,” said Mr. Okoro, who also gave out his mobile phone number to the locals.

“The bomb disposal unit have finished their job so you can go back to your businesses. If you have any useful information, come to my office and let me know,” he added. Emotions ran high as barely clad youth in the area, bearing jagged pieces of bottles and iron rods, threatened to “deal with” whoever was behind the attack on their “king of boys.

According to some sources the incident may be an assassination. But Mr. Manko said that the police would have the “full details” of the incident after investigation. “It’s not just people living here, Lagosians all over the place have no cause to fear for anything,” the police commissioner added.