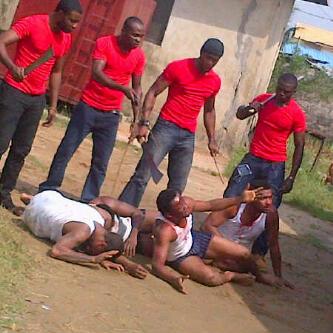 Watching the official trailer of the movie ‘The Four Boys’ – a flick that is based on the true life story of four UNIPORT undergrad students who were killed by a mob in Aluu community, just sends cold chills down the spine. The trailer which is about 1 minute 28 sec., will surely reawaken sad and bitter memories of October 5 2012 when Lloyd Michael (Big L), Tekena Elkanah, Ugonna Ibuzor and Chidiaka Biringa were falsely accused of stealing laptops and mobile phones and subsequently given the jungle treatment.

The lead actors, Zubby Michael, Paul Sambo, Johnpaul Nwadike & Junior Omoigbaele’ played the roles of the four Uniport students with the storyline woven around the lifestyle of the boys on campus coupled with their dreams and aspirations for life in general.

Watch the official trailer below…