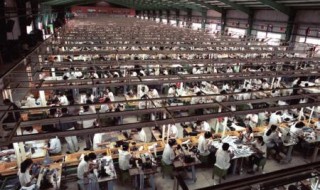 Ho Shi Fua, a 6-year-old Vietnamese kid from a small village near the Mekong Delta, was just promoted to a manager’s position in the Nike shoe factory for his good work ethic and extraordinary relations with other employees, sources say.

Ho Shi Fua has been with the company since he was 3 years old, and began his career in the Nike shoe factory in a division used for lacing sneakers. After just 2 months working in that position, he was promoted to supervisor, overseeing a team that sawed logos onto sneakers and put items into boxes.

“When I first started working for Nike, I never even dreamed of becoming such a huge success! I needed the money, my family and I were barely managing to survive, and Nike seemed like the only choice out there for making a buck or two,” Fua said.

When asked why he gave the promotion to young Fua, executive director for Nike Vietnam Steve Rogers said, “if you’re not an expert in your field, you can’t gain respect from your colleagues as their leader, and Fua has demonstrated on several past occasions that he is truly a master of his craft.”

Mr. Rogers added that Fua still holds the record for fastest lacing and boxing of Air Force 1 sneakers in company history, and that in his opinion, that kind of special skill shouldn’t be wasted on trivial jobs.

The staff’s favorite employee said he feels truly honored by the promotion, and intends to use the significant pay raise to feed his entire village, and eventually, after some skillful saving, treat himself to a pair of sweet Nikes.