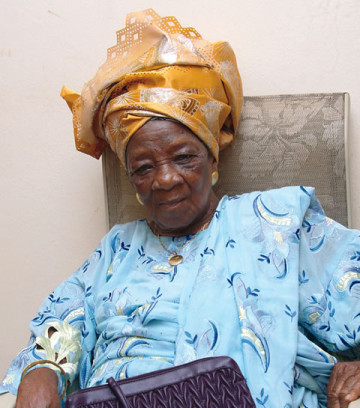 In this interview with GBENGA ADENIJI, Mrs. Florence Odimayo, talks about her upbringing and her childhood days in Ondo State

When were you born?

I do not know because there was no record. But my children calculated it from the time I got married in 1944 and the age of my first child. One of them is over 70 years. They also discovered that averagely, those in my group got married when they were 23 years old. That was how they discovered that I am at least 102 years old.

Did you attend any school?

Yes. I went to a Methodist school in Okitipupa, Ondo  State. My father had four wives. I am the second child among the seven children my mother had.

After you left Methodist, did you proceed in your education?

I did not. I wanted to learn tailoring but the man seeking my hand in marriage was then planning to leave my hometown. He said if he should leave, someone else would marry me.

Where did you meet him?

He was a court clerk in Erinje, Okitipupa Local Government Area. We met in the house of one of the elderly men in my hometown and he told the man that he liked me.

Was it the dress you wore that day that attracted him?

We were fond of wearing boubou. We did not dress lavishly then like present-day ladies who will overdress with skimpy attire.

When he said he liked you, how did you react?

We normally ran away from any man who indicated love. But as was the custom, my father was contacted and he told me not to avoid him because he was in support of it.

Before the man came, were there other suitors?

I was not aware of any. It was my parents that usually got to know about any love interest any man made concerning me. It was when it had their approval that I would be told.

Can you tell me about your wedding experience?

It was a traditional wedding and full of drumming and dancing. We later went to a church for thanksgiving. We understood each other. I had a senior wife.

How did you relate with each other?

I was younger. So, she ensured she drew me closer.

What trade did you do when you got married?

I did not learn any trade. I told him I wanted to learn tailoring but he did not approve it. He refused to allow me because he said other men would be making advances at me. After sometime, he took me to a woman to learn there but it was only for a short while.

How many children did you have?

I bore him two children before he died. A boy and a girl.

What did you do after his death?

Was the man married?

No. He was single and after I told him that I already had two children he said there was no problem.

Did he say what attracted him to you?

My youthfulness was still there. I guess that was the reason. I had four boys for him. We were into farming and we were very committed to it.

What kind of training did you give to your children?

Since we were into farming, their father, because of his passionate love for education, made it compulsory that all of them received quality education. We never allowed any one of them to misbehave and punishment was discharged accordingly.

Do you have any special food?

I like eating fufu, beans, Eba, yam and stew and rice.

Is there any way you relax?

I used to dance well when I was younger. But age has set in. I also like reading the Yoruba Holy Bible or sleeping. But here in Lagos, I do not find people of my age group to play and interact with.

Are you still in contact with your childhood mates?

No. Some have died and I have lost contact with those still living.

How best should parents train their children?

Parents should not allow their children to keep bad company. Children must not go against their parents’ wish. Above all, parents must be prayerful. They should endeavour to pray for their kids always.  I know the impact of prayers because they have had great positive influence on my life.

What is the difference between the training children receive nowadays and how you were trained?

The training children are receiving today is totally different from ours. There is no child that would disobey his parents during our time. Both parents jointly gave orders. So, there was no way one could run to any of them, in order to disobey the other. But these days, when you talk to children, they will respond in English. If you talk to them they will not answer. A child cannot be going out now and you ask where he or she is going. The child will ask, “Why are you asking?”  They are not listening to elders.

Can you recall any memorable moment?

Yes. When late Chief Obafemi Awolowo was campaigning during the Western Region era. We danced round and I also remember our women group celebration in Methodist Church, Ondo State.