Home Metro News We want to spend our money on surviving, not for burial –...
Facebook
Twitter
WhatsApp 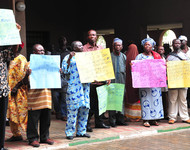 Members of the Nigerian Postal Service (NIPOST) pensioners have appealed to the Federal Government and the management of NIPOST to pay their over seven years arrears, saying their pensions is for them to live and not for burial.

In the meantime, the protesting pensioners have vowed to continue to disrupt NIPOST activities until the management settles all unpaid pensions and arrears, especially after the deadlock of a meeting between the pensioners and the management of NIPOST in Abuja, recently.

According to the Chairman of the Lagos chapter of Nigeria Union of Pensioners (NUP) NIPOST branch, Mr Yomi Akindutire, NIPOST management was not prepared to settle their seven-year unpaid pension arrears, or reach an agreement with the retirees on the issue. Akindutire then vowed that members would continue to protest until government listened and addressed their plight.