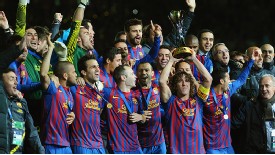 Xavi Hernandez says the current Barcelona side will be remembered as one of the greatest sports teams of all time and will be talked about in the same breath as the legendary LA Lakers basketball team containing Magic Johnson and Kareem Abdul-Jabbar in the 1980s.

Xavi, 32, was speaking to the Federacio Catalana de Futbol (FCF) website as he is one of the ten players, including seven from Barcelona, nominated for its ‘Catalan Player of the Year’ award.

Jordi Alba, Sergio Busquets, Cesc Fabregas, Gerard Pique, Carlos Puyol and Victor Valdes are the other Blaugrana players in the running, while Joan Verdu and Sergio Garcia of Espanyol, and Piti of Rayo Vallecano, make up the shortlist.

The presence of so many great individuals on the scene simultaneously means this Barca team would go down in history, even if the players were not all aware of it yet, according to Terrassa-born playmaker Xavi.

“We have not won just La Liga titles and Champions Leagues, but we have gone with the national team and won European Championships and World Cups,” Xavi said. “We do not realise it now, but in five or six years, when this generation has passed, we will be remembered like the Lakers of 30 years ago. An historic team. You are not fully aware of it at the moment, because you devote yourself to working day to day, you want to compete, you want to win.”

Such widespread recognition was only achieved by winning trophies, although Xavi insisted that was not always fair on the individuals involved.

“In the end it depends on the results,” he said. “You can do very well and your team does not win, football is a team game. People only see if you win and if you lose it is a failure. In that way, it took a while for recognition to arrive because before we were not winning. Now it is different. Now we have all the recognition possible, not just at home, but all over the world.”

Xavi has now won all there is to win in the game, however he was criticised earlier in his career, when many felt he did not have what it took to establish himself in the Blaugrana side. He accepted that spending time away from the Camp Nou may have helped certain players – for example Fabregas and Pique – to become the stars they now are.

“Possibly you mature more quickly [if you leave],” he added. “You see another type of football, more aggressive, more intense. Staying worked out well for me, although things did not go so well at the start. In the end, due to stubbornness or whatever it was, some of us – me, Valdes, Puyol and Iniesta – we put up with it, even though there were times when the results did not arrive. There are different options, everyone should do what seems right to them.”

The midfielder, who won the FCF trophy last year, said he hoped team-mates Busquets or Valdes took the award this time around.

“I believe ‘Busi’ has not yet received the global recognition that he deserves for being the great player he is,” Xavi said. “I would also like if Valdes won. I would like it to be one of those two.”

Asked if he would change anything were he to become Barca coach, Xavi was firm.

“No,” he said. “As I believe so much in this philosophy, I am delighted with it. I like how Pep lead the team, and how Tito [Vilanova] and Jordi [Roura] are doing it now.”