As the resignation of Pope Benedict XVI throws the Catholic world into the search for a new leader, there are three Nigerian cardinals who are qualified for consideration 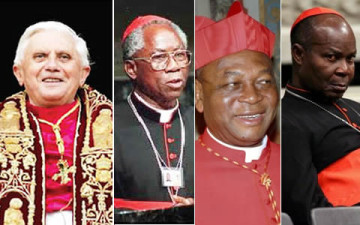 The sudden resignation of Pope Benedict XVI as the head of the Catholic Church on Monday came to the Catholic world and many people around the world as a surprise. The reason is that although the old man’s reason for resignation is understandable, the decision is nevertheless an unusual one. The Pope cited ill-health prompted by old age as reason for his action. He is 85 years old.

Very important is also the fact that the action has thrown the Catholic world into a search for a successor. His resignation takes effect from February 28. The Vatican, in response to the development, said a worthy successor would be elected before Easter. Now the ball is in the court of the College of Cardinals of the Catholic Church to elect a new pope.

The Catholic Church in Nigeria has at least three popular cardinals – Cardinal Francis Arinze, Cardinal Anthony Olubunmi Okogie and Cardinal John Onaiyekan. All the three could vote. Arinze, who was born in November 1932, will turn 80 in November this year. Okogie, retired at the mandatory retirement age of 75 last year, while Onaiyekan was born in 1944.

However, since the new pope will emerge from among the conclave of cardinals, one of the questions that arise in the wake of the pope’s resignation is: can any of these Nigerians make history by becoming the first African or black person to attain this plum position?

Francis Arinze, who was born in Eziowelle, Anambra State, Nigeriaon November 1, 1932, is currently Cardinal Bishop of Velletri-Segni (succeeding Joseph Ratzinger, who became Pope Benedict XVI) since 2005. Arinze was one of the principal advisors to Pope John Paul II, and was considered papabile before the 2005 papal conclave, which elected Benedict XVI. He was named a cardinal on May 25, 1985.

Okogie was born on June 16, 1936 in Lagos. He hails from Uromi in Edo State. His father was Esan and his mother, Yoruba. Okogie was ordained as a priest on December 11, 1966. He holds a licentiate in sacred theology, and had planned to study in Rome, but was called to Nigeria where he was a pastoral assistant at the Holy Cross Cathedral. He was drafted into the Nigerian army, and served there as a chaplain. After another period of service at Holy Cross Cathedral, he was an instructor at King’s College, Lagos.

In 1971, he was ordained titular Bishop of Mascula and Auxiliary of Oyo, and in 1973 named Archbishop. As Archbishop, Okogie was the President of the Christian Association of Nigeria, and from 1994 to 2000, headed the Bishops’ Conference of Nigeria.

Among other radical ideas for which he is famous, Cardinal Okogie once volunteered to die in place of a Muslim woman who had been condemned to death by stoning by an Islamic court for adultery.

He was proclaimed Cardinal by Pope John Paul II in the consistory of October 21, 2003, and holds the title of Cardinal Priest of Santa Maria del Monte Carmelo a Mostacciano (or, in English, Blessed Virgin Mary of Mt. Carmel of Mostacciano). During his cardinal years, Okogie was one of the cardinal electors who participated in the 2005 papal conclave that selected Pope Benedict XVI.

His resignation from the pastoral governance of the see of Lagos, because of having reached the age limit of 75 years, was accepted on May 25, 2012.

He was made a Cardinal by Pope Benedict XVI in a consistory on November, 24 2012. As Cardinal-Priest, he was assigned the titular church of San Saturnino.

On Thursday, January, 31 2013, Pope Benedict XVI appointed Cardinal Onaiyekan to serve as a Member of the Congregation for the Doctrine of the Faith and as a Member of the Presidential Committee of the Pontifical Council for the Family. He will hold these memberships until his 80th birthday.

Interestingly, a report published in Los Angeles Times on Monday notes that speculation on Pope’s successor has recommended Africa and Latin American cardinals. It identifies among others Arinze, Ghanaian Peter Turks and Brazilian Odilo Scherer as possible candidates.

The Vatican says it expects a new Pope to be elected before Easter.

Speaking with the News Agency of Nigeria on Monday in Ibadan, the Catholic Archbishop of Ibadan Arch Diocese, Most Rev. Alaba Job, said the news was saddening.

Job said that though a rare occurrence, the decision by Pope Benedict would have to be accepted since it did not contravene the Canon Law of the church.

“It is not a common thing, in fact, it is rare to see a Pope resign and the last time this happened was centuries ago.

“Though we did not expect it, we have to commend this man for the courage to take such a weighty decision as he has been doing well over the years.”

“I believe he is acting on God’s direction, so who are we to query God?