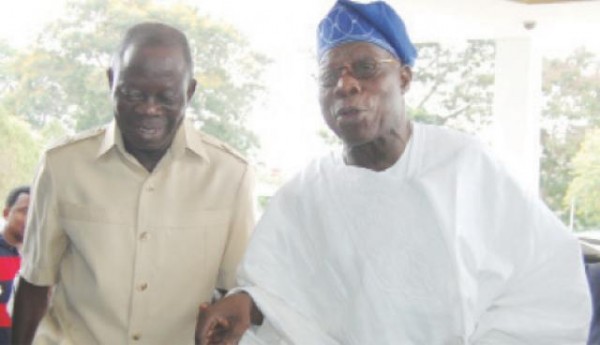 Former President Olusegun Obasanjo said in Benin on Thursday justified why he launched  his foundation in London – so that the 54 African countries would have access to its progammes and activities.

Obasanjo made the remark when he visited the Governor of Edo State, Mr Adams Ohiomhole, adding that another reason was to enable the foundation “to tap resources from outside Africa to be able to do good to Africa’’.

The former Nigerian leader commended Oshiomhole for being part of the launch of his Foundation in London.

Obasanjo used the opportunity to explain why he opted for a private sector driven economy during tenure as president.

He said, “ When I was Head of State and I saw that there was no way to manage Nigerian economy except by indigenisation and we went for indigenisation.

“But the truth is that indigenisation did not succeed the way we wanted.

“I became an apostle of genuine private sector-driven market economy.”

Obasanjo said that when God gave him a second chance to become president, he drew from his past experience.

“I hope the governor is learning the lessons I have learnt so that this state, I can see the signs, which was run down, is now being run up.”

Obasanjo said  Oshiomhole had started facing reality and commended  him for turning things around in Edo.

Obasanjo also told newsmen that his administration was able to tackle corruption internally and externally to the satisfaction of  some people and disenchantment of others.

“Some people do all sorts of things but the point is that when you have a problem and you attempt to cover it, you are not solving the problem. If anything, you are complicating the problem,’’ he said.

On security, Obasanjo said “even security, I have talked about it, (but) I have been called names.