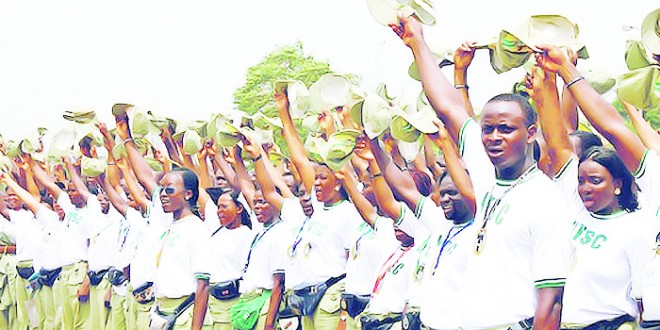 Batch ‘A’ 2012 Corps members passed out recently. But many of them are not looking forward to the event. Reason: the high unemployment rate and lack of low-interest loan  for graduates, who want to go into business. GERALD NWOKOCHA writes.

Today, Batch ‘A’ 2012 Corps members will pass out after the one-year mandatory service. In the past, it was an event graduates looked forward to with high hope of a better future. Today, Corps members do not share that sentiment. Many of them are not happy because “we are going to join millions of unemployed graduates”.

Many Corps members had come to see the National Youth Service Corps (NYSC) as an avenue for employment after service. Many of them lobbied to change their postings and places of primary assignment to either government offices or corporate firms.

Last year, the Federal Government introduced a policy, mandating the NYSC directorate to stop posting Corps members to private firms. Former Minister of Youth Development Mallam Bolaji Abdullahi, who introduced the reform, said the NYSC was becoming moribund, adding that there was need to revamp the scheme for better results.

Abdullahi said the government had cogent reasons for redirecting the energy of the youth to four sectors of the economy.

He said: “Posting of Corps members to various parts of the country in the area of rural health care delivery, education, infrastructure and agriculture will lead to equitable labour supply and create equal development across the nation, thereby making the youth to serve the community, instead of being cheap labour for private firms in the city.”

The Corps members passing out today are the first set to be posted to the four sectors. Many of them bemoaned their postings to remote villages, where they said they could not utilise their business skills. They are afraid that after passing out they will be abandoned.

They are also aggrieved at what they call a ploy to get them to serve for one more than one year through the background. To them, the requirement that they should go for one year practical training to benefit from the Subsidy Re-investment and Empowerment Programme (SURE-P), amounts to “second service”.

They said instead of providing jobs to practicalise what they were taught in school, government wants them to go for another round of training, which may not ensure immediate employment after completion.

Abdulkadir Muazu, who served in Abuja, described the SURE-P training as a waste of resources. He wondered why the government could not channel the resources to provide loans to business-minded youth.

Stanley Ibeku, a former Corps member, described the training as government contractors idea. He said: “The idea is irrelevant. Why did they not make the training available to graduates during the service year? Are they also advocating the scrapping of NYSC?”

Most Corps members, who spoke to our correspondent, described their service year as a waste of time.

“What do you expect when Corps members are sent to communities where there is no life for a whole year and yet when they are through, there is no immediate employment? The whole thing is a waste of time,” said an outgoing Corps member, who served in Kaduna.

Those posted to remote villages said the service year was hell for them. Idris Ibrahim, who is passing out today in Katsina State, told CAMPUSLIFE that the service year was tough for him. He was posted to a community where there is no electricity. To make calls, he said, was a problem. He wondered why he was posted to a village when there was no meaningful thing the villagers were expecting from Corps members.

Hope Ofobike, who served in Niger State, said it was as if, she was cursed to waste a year.

“The experience is not worth it, because I was made redundant for 11 months. The best way to engage Corps members is to repeal the policy, which makes all Corps members to teach or serve in rural communities. I studied Mass Communication and during the service year, I was supposed to be posted either to the print or electronic media. But I was asked to teach. Now, employers will be asking for two or three years experience in journalism. My brother, where will I get that when I was posted to a rural school?” Hope said.

Charles Israel, who served in Kokona Local Government Area of Nasarawa State, said serving in the North was depressing. He told CAMPUSLIFE that the blocks of classrooms in the secondary school where he served had all collapsed. “I don’t know how they want us to survive in such environment,” he wondered.

Chinwe Madubuike, who served in Federal Capital Territory (FCT), has a different story. “I fell in love with the students I taught at my place of primary assignment. I have a good service year not because I served in FCT, but because I was posted to teach, which is what I like,” she said.

Gbeminiyi Ope-Ewe, who served at Africa Comprehensive School, Asokoro, Abuja, was discouraged when she was posted to a school but her experience was a source of inspiration to her. “I want to groom youth after my service year. I want to open an outfit for talent discovery and skill acquisition,” she said.

Emeka Oge, who was in Niger State, said the service would be meaningful if Corps members are employed after service. “If we are made to be looking for jobs after our service year without provision of loans or service that can engage us productively, the nation has no business sending anybody to serve the in rural communities after their degree programmes. Let graduates find jobs after they complete their university degrees. This will save time and resources than sending us to places where none of our leaders have been to.”