If you describe Mrs Oluwakemi Adeoye as the Biblical Deborah, you won’t be mistaken. She told us how she got a revelation and the names of her baby three days after marriage but did not see the manifestation until 14 years after. 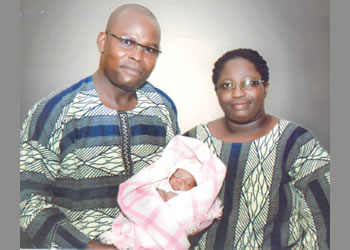 Oluwakemi was born into a Baptist family and is very conversant with the word of God. Maybe her greatest assets are that she truly believes in God.

Fortunately also, her husband, Gbenga, belongs to the same Baptist denomination. She and her spouse are from Abeokuta, Ogun State. Their positions in their various families, however, before coming together in holy matrimony on Saturday, April 3rd 1999, seemed to add to the pressure of the need to have children soon after marriage.

Mrs Adeoye is the third of five children, but the first daughter while her husband, Mr Olugbenga Adeoye, is the first of six children and the only son. His five sisters are happily married and blessed with children.

Having met when Oluwakemi was in Form Four, and Gbenga in the polytechnic and had courted for 15 years, both understood each other and did not take the issue of not having a baby immediately after marriage too seriously.

It was not until the fifth year that they considered it a challenge and decided to seek medical and spiritual assistance. They were invited to churches for prayers. Their parents, especially Pa and Ma Adeoye, invited them to meet with pastors who ministered in their church, especially during special programmes. For a while, Mrs Adeoye attended deliverance programme of a church at Aremo area of Ibadan and was also invited by a colleague at work to attend God’s Voice Ministry programmes at Alakia area of Ibadan.

Her words: “I went to God’s Voice Ministry in September 2010 and I had menstruated that month. So, the woman in charge said I should wait till I see my menstruation in October to enable her to know my ovulation period. Alas! My menstruation refused to come that October.

“I visited big hospitals, mission hospitals and privately owned hospitals in Ibadan and they all said I was not pregnant. I had urine and blood tests including scan tests but they all turned out negative,” she revealed.

In December, however, Madam Evangelist Oluwasola, asked her to have a special test in her laboratory wherein the red blood cells were separated from the white blood cells, and that was it – the result revealed that she was pregnant. But by January 15th, 2011, she started bleeding and when she prayed, God told her that nobody could query Him and that the issue was long concluded, she would have a child.

By May 2011, she had bought all her baby things although she did not know the sex of the baby because God did not show her, so she bought unisex materials. She was becoming fatter but her tummy was not too big.

By July 2011, she had contractions, felt the baby’s movement but the hospitals declared that there was no baby in her tummy. In fact, a particular doctor told her that her fatness was obesity precipitate menopausal sign.
She sought spiritual assistance when she wrote Pastor Enoch Adeboye in September 2011 and he replied her through a SMS that she would soon share her testimony.

Mrs Adeoye became an object of ridicule when the baby refused to come in spite of the change in her physique but she was not bothered. By January 2012, she contemplated having a surgery to bring the baby out. She prayed and God gave her the go-ahead, warning her, however, that the doctors would be reluctant to carry out the surgery as there was no scan or test result to back the surgery. And so it was.

But as from March 2012, she had her menstruation regularly. Friends invited him and his wife to visit America, get some medication from India, consider remarrying or adopting a baby, but in it all, he was not led to take to any of the options because he believed they had not exploited all options.

His parents were constantly falling sick and he knew it was because of the issue. So, he advised them to put all their hope in God to behold the miracle as he was certain that God would bless them with children.

Mrs Adeoye menstruated till January 2013 and vomited everyday in January till she had the baby on January 15th in the night at the mission house.
“The delivery, though painful, was simple. I was not in labour for too long before I had the baby, may be three to five minutes and the baby came, a girl. And we christened her Emmanuela, Opelope-Jesu, Ite-Oluwa-kii-si Adeoye,” the new mother stated.

Mrs Adeoye, who noted that there was no rancour between her and her husband or her in-laws throughout their challenging period, urged all Christians to put their hope in God, adding “Whether you win or whether you lose, God is God. No matter how good or bad your situation, it will not change the fact that God is God. You cannot push God and He has no second in command. So, why not put your trust in Him?”Fmi