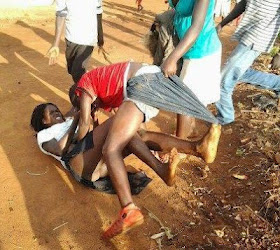 It was gathered that Blessing was angry that her friend, Aminat slept with her lover called Kenny who she claimed was planning to marry her.

The fighting resulted in Blessing allegedly using a broken bottle to stab Aminat in the bréast.
Her bréast was badly injured and she was rushed to a private hospital where she is being treated.
The 27-year old Blessing was arrested and charged to Apapa Magistrate’s court for assault occassioning harm.

On the day the incident happened, Blessing allegedly ambushed Aminat along the Railway line at Ijora-Badia and engaged her in a fight.

She was alleged to have broken a bottle of beer which she used to stab Aminat in her left bréast.
The matter was reported at Ijora police division and Blessing was arrested and charged to court for the alleged offence.

She pleaded not guilty.

The presiding Magistrate, Mrs. A .K .Shonubi granted her bail in the sum of N50,000 with two sureties in like sum.

Blessingwas remanded in prison custody pending when she will fulfill her bail condition.