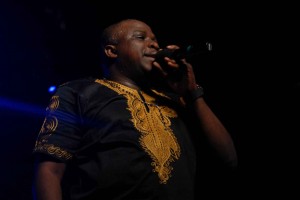 Popular Nigerian comedian, Gbenga Adeyinka the 1st, who has carved a niche for himself as the host for big events thinks he’s no longer marketable as a man. He says ladies no longer find him attractive.

The man for the big events was spotted at another big event; the unveiling of Stellon Solution, where the comedian said his pot-belly and old age are probably the reasons ladies don’t ‘chase’ him.

“Some of us who are pot-bellied and ‘old’ don’t have the pleasure of being chased by women anymore. We have left it for the younger ones. Women don’t chase me anymore; they know this big belly wouldn’t let me run,” Adeyinka said.

Contrary to beliefs that women don’t take comedians seriously, the comedian says that his wife takes him serious.

“I don’t know if women don’t take comedians serious,” he says, “but my wife takes me serious, especially when I want to pay school fees.”

Adeyinka says he’s not threatened by thee rapid growth of young comedians, rather he’s happy they are doing well for themselves.

“There is no competition. I do not feel threatened by the younger ones. Who is there to threaten me? I still work about four times a week. I am not threatened by anybody. If anything, I am grooming younger ones so that I can relax and do more expensive and fewer jobs,” he says.