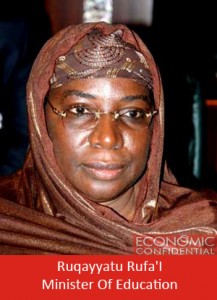 The Federal Government has lamented that about 10.5 million primary school-age children in Nigeria are denied access to basic education, a figure government said is the highest in the world.

This was made known by the Minister of Education, Professor Ruqayyatu Ahmed Rufa’i, while addressing newsmen in Abuja, as part of the programmes marking the 2013 Commonwealth Day celebration on Monday. According to a newly released data by UNESCO, an estimated 61 million children of primary school age are being denied their right to education globally. And, Nigeria alone is home to an estimated 10.5 million out-of-school children – 3.6 million more than in 2000, or 42 per cent of primary school-age population.

Also, in sub-Saharan Africa, the number of out-of-school children of primary school age climbed from 29 million in 2008 to 31 million in 2010. Although enrolment in the region has risen, it has not kept pace with rapid population growth.