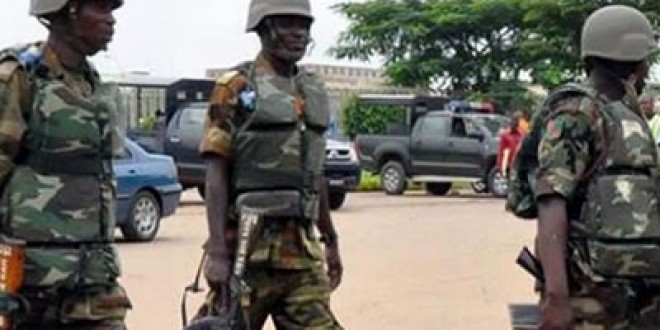 What could have been a bloody Easter was averted when the Joint Task Force (JTF) engaged suspected terrorists in a shoot-out at Unguwa Uku, Kano State killing 14 of the suspects and recovering vehicles primed probably for an attack today.

According to residents of the area, at about 4AM Sunday morning, the compound housing the suspected terrorists was invaded by the JTF, and what ensued were the heavy sounds of gunfire and explosion which lasted for over four hours.

The lifeless bodies of persons suspected to be that of the terrorists were seen been carried out of the building with different guns as improvised explosive devices were also recovered from the building.

The house has since been demolished while the corpses have been deposited at the Murtala Mohammed Specialist Hospital’s morgue.

Confirming the early morning operation to journalists, the commander of the 3rd Brigade in Kano, Brigadier General Iliyasu Abbah said one soldier was killed in the onslaught while one other was critically injured.