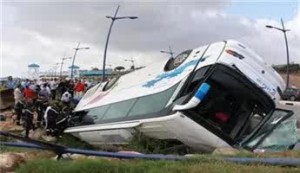 Fourteen Palestinian pilgrims were killed Saturday after their bus turned over on the Dead Sea road near Jordan’s al-Rama neighborhood, the Amman-based daily al-Ghad reported.

Five others were in critical condition, according to the report.

The newspaper quoted sources in Jordan’s Public Security Directorate as saying that a bus carrying Palestinian pilgrims who performed the Umrah pilgrimage in Saudi Arabia collided with a truck and a small car before it turned over.

The truck driver was also killed in the accident.

“We are contacting Jordanian officials for specific details,” he said.