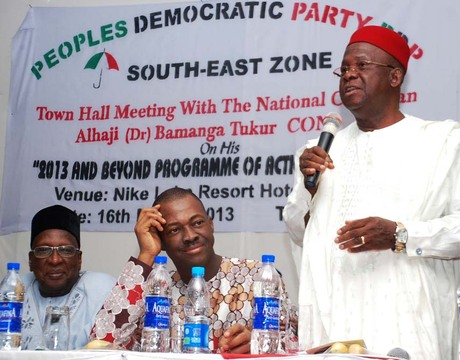 National Chairman of the Peoples Democratic Party (PDP), Alhaji Bamanga Tukur, Saturday in Enugu reiterated the readiness of the party under his stewardship, to abolish the imposition of candidates in the election of candidates to fly the party’s flag in future elections in the country.

Speaking during a town-hall meeting with stakeholders of the party in the south east including the governors of Enugu (Sullivan Chime), Ebonyi, (Martin Elechi) and Abia (Theodore Orji, represented by his deputy, Chief Ananaba), members of the national and state assemblies, ministers, among others, the PDP National Chairman insisted that the old order where politicians hand-pick candidates for the party was over, stressing that time had come for the party to be properly rebuilt in order to ensure equity and justice.

While identifying what he described as “sharing formula” as the major challenge confronting the party, Tukur urged the stakeholders to embrace peace and harmony as well as imbibe the spirit of sacrifice as that was the only way the party could retain its status as a truly national party that respects the yearnings and aspirations of the people.