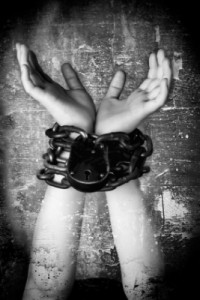 Speaking at the police headquarters in Abeokuta as Okon was paraded before journalists on Wednesday, the state Commissioner of Police, Ikemefuna Okoye said that she was arrested after the young girls were molested in the house where she brought them to in Abeokuta.

“Men of our Rape and Human Trafficking Unit arrested her when it was learnt that she was the one who trafficked the under-aged girls to Ogun State where they were raped,” Okoye said.

“She is a s*x worker, who specialises in bringing new workers to her boss. Investigation is still on to ensure all those connected with the case are arrested.”

Okon said she did not go beyond primary school level in her education and was brought to Abeokuta from Cross River State in 2012 to “sell things in a shop.”

“But when I came here, I became a prostitute and get about N3,000 every day. My madam was the one who told me to look for girls that could help her with household chores and earn some money. I don’t know the name of my madam. We only call her madam,” she said.

“I went to my village to bring the girls. I told the mother of one of them that I planned to take her to Ogun to look for work. Her mother agreed but the other girl said she wanted to follow her friend too. So, I brought both of them.”

The molestation, it was gathered, was a way of initiating the girls into the world of prostitution.

The Ogun State police command has however vowed to get to the root of the matter and ensure all the culprits face the full wrath of the law.