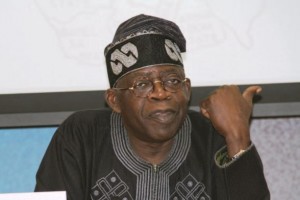 Former governor of Lagos State and national leader of Action Congress of Nigeria (ACN), Senator Bola Ahmed Tinubu, has criticized the Federal Government for practising what he described as ‘voodoo economy’ by keeping a foreign reserve of $46billion while owing $42billion as local debt.

Tinubu made this known during the launch of the book he co-authored with United States former Consul-General in Lagos, Brian Brown, and entitled Financialism: Water from an Empty Well. Tinubu argued that the approach of government to the country’s political-economy was wrong.

According to the former governor, it made little sense accumulating foreign reserve to the tune of $46billion with an interest rate of just two per cent while the country owed $42billion local debt over which it paid 16 per cent interest rate: “The accumulation of money by the Federal Government is a misplaced objective for these times. Our driving purpose must be to channel idle human and material capacity into productive streams that furnish jobs and manufacture tangible goods bettering the living conditions of every citizen.”

The former governor continues: “I say it is better to spend the money and save the people… I believe in the national government saving money if savings is for the purpose other than itself. For a government that prints its own currency, to save that currency for merely saving’s sake is to accumulate worthless paper. Instead, our money must catalyse development, enriching the broadest spectrum of people. To say we are saving money for a rainy day while everyone is already drenched and wading through flood waters makes little sense to me.”