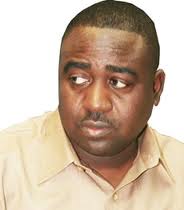 Three suspected fraudsters who attempted to defraud the Benue State Government of $3 million have been paraded by the Department of State Security Services, Benue State Command.

The three suspects were named as Mark Gbaa, Bulus Ashon, and Nuhu Bawa of various addresses.

Parading the suspects before journalists in Makurdi, DSS Director, Mr. Rasheed Adediran stated that two of them were intercepted at the Government House while the prime suspect, Mark Gbaa was later arrested in Jos, Plateau State.

According to Adediran, the duo of Bulus and Nuhu were sent by Mark Gbaa – an indigene of Tombo Village, Buruku Local Local Area of Benue State – to collect the said money from the Governor to help him (Suswam) resolve certain unresolved issues he has pending with the EFCC.

It was revealed that Nuhu is an employee of College of Technology, Pankshin while Bulus is a Mobile Policeman with the 44 Police Mobile Force, Abuja.

The suspects are already helping the command in the investigation.