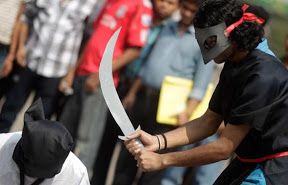 The men were arrested in 2006 jewelry-stealing ring. One man, Nasser al-Qahtani, told the Associated Press attested to inhumane treatment following his arrest. He claimed that he was tortured for a confession, not appointed a lawyer, and only appeared before a judge three times during the lengthy trial. He also claimed that his torture marks were ignored in court.

According to reports, he was 15 years old at the time of his arrest. Qahtani and the other six men were originally sentenced to death by firing squad and crucifixion in 2009.

Human rights activist group Human Rights Watch appealed to the country’s King Abdullah on March 4 to not execute the men, stating that there was “strong evidence” of an unfair trial.

The kingdom however, follows strict Islamic laws which state that people convicted of murder, raped or armed robbery can be executed. Saudi Arabia has already executed 23 people this year.

These seven men were killed by three men with swords in the southern city Abha; the region is notoriously targeted with discrimination.

Saudi media reports that the government is considering doing away with public beheadings and seeking firing squads as an alternative. Lethal injections have also been reported as an option.

“It is high time for the Saudis to stop executing child offenders and start observing their obligations under international human rights law,” he said.