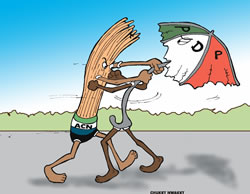 The Action Congress of Nigeria (ACN) yesterday raised the alarm that the nation’s democracy is being threatened by the ruling Peoples Democratic Party (PDP) by its quest to retain power at all cost through its involvement in the ongoing efforts to sabotage the merger of opposition parties.

National publicity secretary of the party, Alhaji Lai Mohammed said in a statement that it is important for all lovers of democracy within and outside Nigeria to join hands in stopping the PDP and its cohorts from truncating the nation’s democracy.

“Having misgoverned Nigeria since the country’s return to democratic rule in 1999, the PDP realizing that its time is up has now resorted to a dangerous game aimed at either keeping the party in power at all costs or crashing the country’s democracy. This is a dangerous game that must be stopped, with the good people of Nigeria, not just the progressives, leading the charge,” Mohammed said.

“The dirty game started by the ABN snowballed into a series of cataclysmic events that culminated in the annulment of what is still widely regarded at the best elections in the country, as well as the ascension into office of a man regarded as the most brutal dictator in the country’s history.

“The revelations have been mind-boggling: A well-known PDP hatchet man and a card-carrying member of the party hired the apparently-naive lawyer who filed the phantom APC’s registration request at INEC; an apparent card-carrying member of the PDP working in INEC is the internal contact of the saboteurs; The email addresses used by the phantom APC were culled from that of PDP’s publicity office, while the scallywags who have now donned the garb of ABN (under the African Peoples Congress) made sure to copy their emails to their masters at the PDP.

“Equally mind-boggling is how the phantom APC, backed by its contact person in INEC, short-circuited the process of seeking registration by using computer-generated forms and fake signatures, among others. Ironically, in seeking to stop the All Progressives’ Congress, the PDP has now shot itself in the foot, as discerning Nigerians do not believe in its denials of any linkage with the so-called African Peoples Congress,” he said.

But in a sharp reaction, the PDP through its national publicity secretary Olisah Metuh said “in fact ACN has shown that it is the real threat to Nigerian democracy and they are unyielding in their plot to truncate the system with propaganda, lies and media deceit because they have been rejected by Nigerians.”