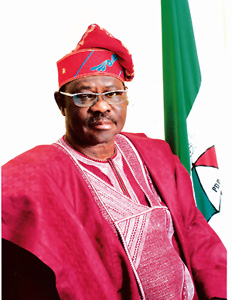 A former Chairman of the Peoples Democratic Party, Col. Ahmadu Ali (retd.) has come under fire from the pan-Yoruba socio-cultural organisation, Afenifere, who has described him as uncouth, ill-mannered and foul-mouthed.

Ali’s criticism came on the heels of a recent newspaper interview where he (Ali) lampooned the Yoruba for failing to “worship” Obasanjo, whom he described as the “god” of the Yoruba.

Ali had reportedly said, “The Yoruba people are a totally ungrateful kind of people in this country” and went ahead to add “The Yoruba are another character.”

But Afenifere in a statement by its National Publicity Secretary, Mr. Yinka Odumakin, said Ali had no lesson to teach the Yoruba in the art of gratitude.

The group said, “Ali’s uncouth remark only portrays him as ill-mannered and foul-mouthed.

“For Ali and those who think like him, Yoruba don’t venerate mere positions but rather leadership through service to the community.

“This explains why the Yoruba adore Chief Obafemi Awolowo who contested the highest office in the land three times and lost and resent Ali’s hero who occupied the same office three times!”

It said Ali’s type of remark against a whole people was totally unbecoming of the ex-Peoples Democratic Party chairman.

The group said, “We ordinarily would have ignored his vituperation but for two reasons: Given his profile as a former chairman of the ruling party and a failed aspirant to the chairmanship of its Board of Trustees, the unwary may be tempted to assume that the words he spoke came from a wise man who is highly informed.

Afenifere added that the Yoruba continued to venerate Awolowo because he used his tenure as Premier of Western Region to banish ignorance through free education and eliminated diseases through free health. Afenifere went on to cite the first television station, the 25-storey Cocoa House in Ibadan, among other imperishables as the legacy of the late sage.

Afenifere said, “In contrast, the years Ali’s hero spent as leader of Nigeria institutionalised corruption, which deepened poverty for all Nigerians including the Yoruba.