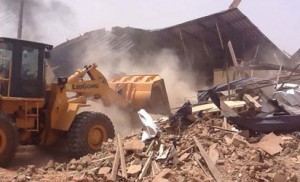 Following the allegation by the Ojora of Ijora, Oba Fatai Oyeyinka Aromire that the house where nine suspected terrorists were arrested in Ijora-Badia, Lagos belongs to Bayelsa State Government, a Yoruba socio-cultural group Afenifere, has called on security agencies to investigate.

Receiving a delegation of Hausa community, the monarch who made the allegation said, “I also want to say that the blame should go to the Bayelsa State government for not taking care of their abandoned house which the evil doers were using as their hideout. We have been talking to them for a very long time to lease it out for the people that would make use of it, but they refused.

“If you ask the Divisional Police Officer, DPO, in this area, he would tell you all our efforts to ensure that they either demolish or give it to the people that would make use of it, but they are yet to respond,” Oba Aromire said.

Afenifere, in a statement by its National Publicity Secretary, Mr Yinka Odumakin, said the claim by the Ojora monarch raises a red flag that cannot be ignored “given the psychological warfare that has been waged against Yorubaland of possible terror attack for about a year now. What has largely been perceived as threat is assuming a near reality with the discovery of this terror hideout.”

The group said recent events compelled it to call for a thorough investigation of the incidence to ascertain “who these suspects are and what links they have with the blood-sucking Boko Haram or Army. Why the Bayelsa State Government would maintain an abandoned property in Ijora-Badia of all places in Lagos?”