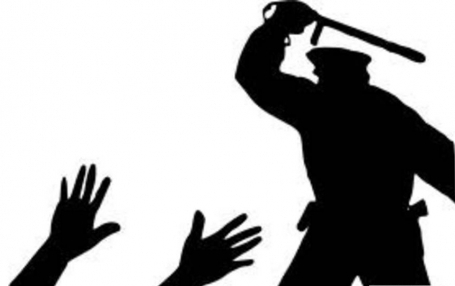 Students of Abia State University, ABSU, who were on a peaceful demonstration to protest the planned revocation of the degree awarded former governor of the state, Dr Orji Uzor Kalu by the institution, were molested by soldiers and policemen yesterday.

The students who had converged on the administrative block as early as 7am to prevent a Senate meeting over the matter – which is believed to be the continuation of the persecution of the former governor, were beaten black and blue and whisked away by combined team of soldiers and mobile policemen.

The protest had started in a peaceful manner and within thirty minutes, the team of security operatives stormed the campus, beating every student on sight, including those who were not part of the protest. In the ensuing milieu, students and staff were seen scampering for safety.

It would be recalled that Kalu had cut short his degree programme at the University of Maiduguri and had transferred his transcripts and other details to Abia State University, where he completed the programme and earned a Bachelors degree when he was governor.

It is believed in some quarters that Governor Theodore Orji who is in a running battle of supremacy with Kalu, set the motion in play for the revocation of the degree certificate the university awarded to his predecessor.

Orji Kalu who is not in the country, has called on well-meaning people of Abia State and Nigeria to call T. A. Orji to order saying “…no human being, except God, has the power to determine any other person’s destiny.”