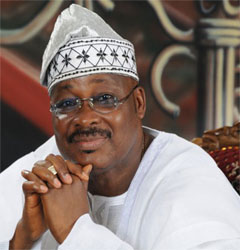 Governor Abiola Ajimobi of Oyo State has launched a transport scheme for civil servants and students in the state.

Speaking at the launch of ten 43-seater buses in Ibadan yesterday, Ajimobi said the buses would be conveying civil servants and students to and fro their offices and schools on daily basis free of charge.

The 10 buses tagged “Ajumose Shuttle” is part of the current administration’s 100 43-seater buses and another 100 mini-buses meant to ameliorate the transport situation in the state.

“As we have said several times in our dialogue with our people, the power we sought, which the Almighty God bestowed unto us through the good people of the state, is the power to do good to our people.

“We thank God that in the last 21 months, we have used the instrumentality of the people’s power to wipe away tears from the faces of our people in discomfort,” he said.

Speaking on behalf of Oyo workers, Chairman, Joint Negotiating Council in the state, Mr. Nurudeen Arowolo, who thanked government for the initiative, said civil servants in the state had never seen a worker-friendly government as the Ajimobi administration.