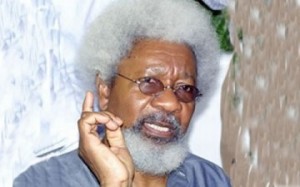 Nobel Laureate, Prof. Wole Soyinka, has eventually spoken out on the state pardon granted to former governor of Bayelsa State, Diepreye Alamieyeseigha, by President Goodluck Jonathan’s government. The Nobel Laureate described it as an act of impunity and a symbol of corrupt mentality.

Soyinka made this known in Lagos on Wednesday during a programme ushering in the Lagos Black Heritage Festival. He lent his voice to those of civil society groups, international community and individuals who had vehemently condemned the President’s action.

Also, on the statement made by the Special Adviser to President Jonathan on Media, Dr. Reuben Abati, who had, on a TV programme, described those who are criticising Jonathan over the matter as suffering from “sophisticated ignorance”, Soyinka said he did not mind being called such a name for bearing his mind on the state pardon.

Therefore, Soyinka insists that: “On the state pardon granted the former governor, I want to join the bandwagon of the ignorant persons. I am happy to be counted among them. For me, this kind of impunity is not unconnected to the controversy, which has been surrounding the N4bn allocation being sought by the First Lady Mission. It is part of the same corrupt mentality,” he said. He also added that it was also disappointing that some ministers had given contradictory interpretations to the object of the pardon.

Soyinka said it was not right for Jonathan to lump Alamieyeseigha’s case with those of the other people granted pardon alongside him. According to him, the cases of other ex-convicts were largely political, as evident in the antics of the late Sanni Abacha junta that implicated them in a controversial coup.

His words: “What is going on right now gives the picture of a government that is floundering and justifying the unjustifiable. It amounts to encouragement of corruption. The felon is wanted by the United States Government. We have a case of an officer of the law – a governor – who went to another country and broke the law of the nation. He jumped bail.

“I believe that such a person does not deserve a state pardon. So, I have joined the league of the ignorant persons condemning the act. I criticise and deplore President Jonathan for granting pardon to the former governor.”