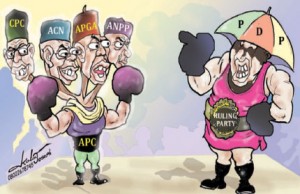 The All Progressives Congress has taken advantage of the embattled Chairman of the Nigeria Governors’ Forum and Rivers State Governor Rotimi Amaechi threats to leave the PDP by expressing the party’s preparedness to receive the Peoples’ Democratic Party governors who share the Rivers governor’s pain.

Speaking to Punch, the spokesmen for three of the four parties in the merger all expressed optimism that the governors and other PDP members would defect to APC as the crisis in the ruling party deepens.

According to the National Publicity Secretary of the Action Congress of Nigeria, Lai Mohammed, it was only natural for politicians leaving the PDP to join the APC.

He, however, clarified that the merger neither initiated nor fuelled the crisis in the ruling party.

“The four parties that formed APC-ACN, Congress for Progressive Change, All Nigeria Peoples Party, and All Progressives Grand Alliance – are not the architect of PDP’s problems. In fact, the crisis PDP is facing today predates the coming together of these four parties. But we will be the greatest beneficiaries of the disintegration of PDP,” Mohammed said.

“On our own, we have not set out to destabilise the PDP, what is happening now was bound to happen and our merger coming at this time is providing an alternative for disgruntled governors, who are unhappy with the way they have been treated in PDP.”

Mohammed said though none of the governors had officially begun discussion with APC, they would be welcomed if they wanted to join the merger.

“To the best of my knowledge, I’m not aware of any of them officially discussing with APC, but what I know is that some of them have openly declared that the coming of our merger is timely, because their scattered umbrella can no longer hold them. So, we have become the alternative for these governors,” he said.

Also speaking, the National Publicity Secretary of the CPC, Rotimi Fashakin, said the doors of APC were open to aggrieved PDP members.

“Not just the governors, all those who have suffered oppression and the travesty of justice that is common in the PDP are welcome to join APC. It’s a political party, if they show interest, they will be welcomed,” Fashakin said.

In the same vein, the National Publicity Secretary of the ANPP, Emma Eneukwu, said it’d be great for the APC to get the PDP governors to become members.

“Politics is all about people and getting a state governor over is not a small thing. Even though I’m not aware of any ongoing discussions with the governors, I believe there could be some underground moves, but not to my knowledge yet. It is possible,” he said.