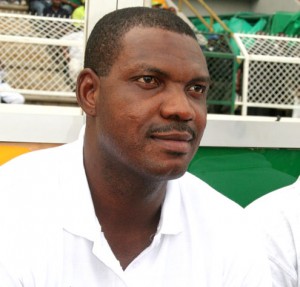 After reneging on earlier promises to offer him a contract which informed his change of mind to return to Sharks of Port Harcourt as chief coach, former Super Eagles boss Austin Eguavoen has resigned from his stint with the Blue Angels with immediate effect.

The media two weeks ago was awash with the contractual dispute between the former international and his employers after Eguavoen insisted he should be offered a contract before he stayed too long in his role as Sharks’ coach but the Rivers Ministry of Youth and Sports and the Sharks management team delayed the whole process.

After waiting for another two weeks coupled with the so far unpleasant outing of Sharks in the 2012/13 league season, Eguavoen reportedly tendered his resignation letter in Gombe during the halftime of their Week 4 0-2 loss to Gombe United at the Pantami Stadium.

Goal.com gathered that Eguavoen used the halftime pep talk to inform his players of his desire to resign at the end of the game owing to the broken promises of the Sharks Management Team and the Rivers government who are yet to invite him for a discussion more than two weeks after persuading him to come back.

Goal.com strived endlessly to speak with Sharks’ media officer Peter Abaje but he was not reachable as at the time of writing this report but some players of the Blue Angels who preferred to speak to the website anonymously confirmed the former international defender’s exit.

Eguavoen’s reign as Sharks’ boss has been dogged with controversies from day one and it came to a snag when the USA’ 94 and France ’98 World Cup star refused to lead his team to their Week One duel against Warri Wolves but instead was sighted at Owerri watching Heartland versus Nembe City same time his club was playing against Wolves in Port Harcourt.

He also left Enyimba last season under cloudy circumstances after his unceremonious resignation also from Nigeria’s U23 team which he failed to guide to the London 2012 Olympic Games football event.