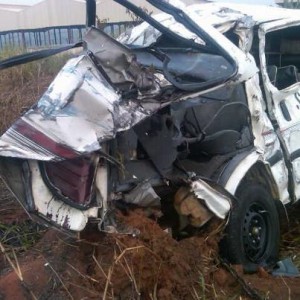 Three people were on Friday killed in an auto crash that occurred at Oloru, outskirts of Kwara State capital, while nine others sustained severe injuries.

In the accident which involved a car and a petrol tanker, passengers in the car were said to be heading for Minna. An eyewitness revealed that in an attempt to avoid potholes on the road, the two vehicles had a fatal head-on collision. The tanker fell and spilled its content on the road, causing the tanker to catch fire which burnt three of the six passengers in the car to death.

The Head of Operations of the Kwara State Command of the Federal Road Safety Commission (FRSC), Mr. Adekanye Olufemi, confirmed the accident.