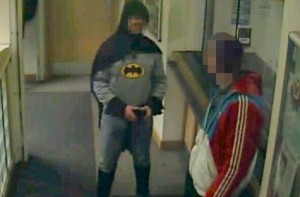 The people of Bradford saw a Super Hero firsthand on February 25 when a mystery figure who dressed as Batman handed a wanted man in at a police station.

Unmasked, it was 39-year-old Stan Worby, who said he accompanied his friend in Bradford while dressed as the caped crusader as a joke, BBC reports.

The takeaway delivery driver said he was “gobsmacked” when his exploits were covered by worldwide media on Monday.

Worby and his friend Daniel Frayne, 27, walked into Trafalgar House Police Station in the early hours of February 25.

Frayne, of Queen Street, Buttershaw, had been wanted in connection with a number of offences. He was later charged with handling stolen goods and fraud-related offences and will appear before magistrates on Friday.

Worby said he agreed to go with his friend to the station after he had been to London for Bradford City’s Capital One Cup Final clash with Swansea.

He had donned the Batman costume for the game and decided not to get changed.

He told ITV’s Daybreak: “Obviously it was done as a joke. He [Mr Frayne] wanted to get straight down. Obviously I wanted my bed. It was half-one in the morning.

“At the end of the day it was a practical joke, just between me and Daniel.”

He said he was annoyed that his paunch looked big when he saw pictures of him in the Batman suit.

Police in West Yorkshire, northern England, were baffled after the mystery crime fighter delivered the suspect to a police station.

Wearing the full costume of the shadowy comic book hero including a cape, he then “promptly vanished into the night to fight crime and the fear of crime in Bradford”, West Yorkshire Police said.

The force has released a CCTV photograph of the “caped crusader”, who is of stocky build, arriving at the police station with his captive.

Neighbourhood police in the Buttershaw area of Bradford revealed details of the mystery on their Facebook page and the incident was captured on CCTV.

The post sparked a slew of theories on social networking sites about the identity of the crime fighter, including suggestions he may know the arrested man since there was little sign of a struggle.

Bradford’s new hero is not the first to pose as a real-life Batman.

In October, a man pleaded not guilty to obstructing US police while dressed as Batman, after he refused to leave them alone while they searched for a driver who had fled the scene of an accident.

Mark Wayne Williams had already been sentenced to six months’ probation after police received a report of a man dressed as Batman on the roof of a business in Michigan.