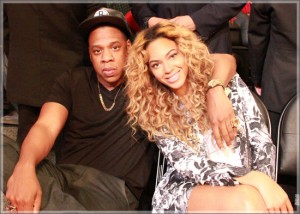 Beyonce and Jay Z’s marriage might not be as happy as they want fans to believe.

According to Beyonce’s credit report, which was obtained by a Russian website, the singer owns a luxury condo in Miami — which she uses as her official address!

Beyonce G Knowles, 31, apparently filed for credit (or a loan) and listed her official address as the entire 18th floor at 1450 Brickell Ave, Miami, FL 33131. Anyone who is familiar with Brickell avenue knows that it is the playground of the rich and famous.

Beyonce, whose social security number, date of birth and phone numbers are also listed on the Russian website, is obligated to give her official address when applying for credit, like everyone else.

It’s interesting that she gave the Miami address rather than her NY address where she lives with Jay Z, 45, and the couple’s daughter, Blue Ivy, 1.

This fuels rumors that Jay Z and Beyonce’s marriage is just a sham to cover up reports that the rap mogul and former NFL star Larry Johnson, 33, may still be lovers.

Anybody Supporting This Govt Deserves To Go To Hellfire – Davido