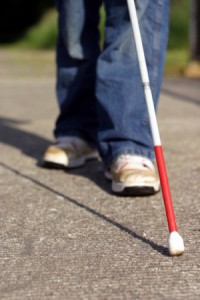 A blind man identified as Abiodun Agiri, has accused policemen of assaulting him and his 13-year-old son, Emmanuel.

Agiri said trouble started penultimate Thursday after he had a misunderstanding with a woman in the Redeemed Christian Church of God, Christchurch Parish, Gbagada.

The father of six, who is also a member of the church, said he had called the member a thief some weeks ago and the person went to report to the Anthony Police Division.

He said, “I had a misunderstanding with a member of the church after one Pastor kalejaiye came to minister at our parish. I had wanted to approach the pastor to lay hands on me because of my condition but they prevented me from seeing him. When the pastor saw what was happening, he intervened and later prayed for me.

“After the prayer, I insulted the workers who had prevented me from seeing the pastor, calling them thieves. I didn’t mean it but I was just angry at the time.

“Last Thursday, one of the workers went to report at the police station and accused me of insulting her and calling her a thief. The policemen arrested me but while at the station, the Divisional Police Officer intervened and told that she shouldn’t have taken it seriously and I was released.”

Agiri said three days later after the Sunday service, he attempted to have an audience with the pastor of the parish but was prevented by protocol officers.

He said, “One of the protocol officers went to call the policemen, my son identified one of the policemen. They assaulted me and I was handcuffed and they broke my glasses and dragged me on the floor.

“The policemen took me outside the gate and dragged me on the tarred road and I sustained bruises in the process. They also beat up my son and detained him.

The victim said he held no grudge against the church because he knew the act perpetrated against him was carried out by a few members.

“The church has been good to me and has been taking care of me ever since I turned blind due to Glaucoma. However, I feel they have poisoned the pastor’s mind against me,” he said.

When our correspondent visited the church on Thursday, the province pastor was not around. A parish pastor, who refused to identify himself, said he could not talk on the matter.

However, a senior church worker, who craved anonymity, said Agiri was a liar.

The worker described Agiri as a violent man who had on numerous occasions inflicted wounds on innocent members of the church.

He said, “Brother Agiri is a very violent man. Last Thursday, he was causing trouble in the church and insulting people. He threatened to kill people and so one of the members had to rush down to the police station to report so as to prevent an incident.

“The following Sunday, he came with a pair of scissors and threatened to stab people. He was scaring worshippers so we had to call the police to take him away.”

The worker lamented that Agiri was rubbishing the image of the church despite its benevolence towards him.

He said, “We pay Agiri N140, 000 per month for his upkeep. The church pays his children’s school fees, set up a shop for him and also gave his wife N500, 000 to start a business and yet he is still behaving this way.”

When contacted on the telephone, the spokesperson for the state police command, Ngozi Braide, said she had yet to be briefed about the assault but said Agiri could lodge a complaint at her office.

“Let the man come to my office and I promise that the matter will be handled,” she said. [Punch]