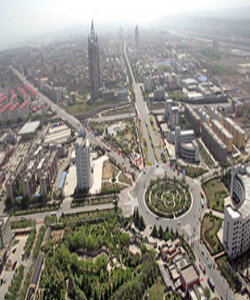 The Federal Government of Nigeria has disclosed plans to ensure the listing of the Centenary city, which is being planned as part of activities for Centenary celebration, on the Nigeria and London Stock Exchanges.

The Secretary to the Government of the Federation, Senator Pius Anyim, who said this at a dinner President Goodluck Jonathan had with top Nigerian Chief Executive Officers at the Presidential Villa, reiterated that no government fund would be committed to the project, as the $100milion budgeted as capital for the project will be sourced from private entities.

“It is the desire of the promoters of the city that in the nearest future, the stock of the city would be quoted on the Nigeria and London Stock Exchanges,” Anyim said.

He noted that the production of the city’s final master plan was at advanced stage while foremost consultants, Price Waterhouse Coopers had been appointed financial consultants for the project, adding that Messrs DDB, Lagos has been appointed the official marketer of the centenary activities.

“The entire celebration is planned to be investment driven such that nobody should put in a kobo without getting value for it,” he said.

Welcoming those present at the dinner, President Jonathan said the involvement of the private sector in the project was a demonstration of his government’s confidence in the sector.

He noted that apart from the Centenary City which would provide all the facilities that Nigerians travel out of the country to go an enjoy abroad, unity squares would also be built in all state capitals to add to their beauty.

“The private sector should take the lead in realising our national aspiration. Your support will identify you and your brand with national success. We are encouraging a citizen driven commemorative event that will replace negative narrative of the nation with a story of a blessed nation”.

“Experience has shown that most of the things done by government do not last. They may look good at the beginning but at the end, they always fall like a pack of cards.